November 20, 2017 no comments in Reflection Connection by acmead

It would be almost impossible to read any news source over the past few days and not be aware of people, formerly silent, speaking up, revealing incidents of past abuse or misconduct. In many cases, at least those that are making the national news, it is not only individuals unloading a burden of hurt and anger that sometimes had been carried alone for years; but importantly it is a growing number of people gaining strength from each other, finding support and courage, and speaking truth to power.

Perhaps we are in the beginning of a societal change, although from my perspective there has been a growing awareness, at least within the church, for a number of years. We all know stories of moving a priest or minister to another location, of smoothing things over, calming things down, keeping things secret and hidden. In the Episcopal Church we began to see a shift in the early 1990’s with the introduction of extensive background checks being required of all clergy, and the continuance of those background checks before every new ministry and after a set number of years if one didn’t move.

As an interim that meant going through a new background check more than every two years on average. Along with background checks, attendance and participation in education about abuse and misconduct became mandatory, teaching people to recognize signs of abuse and misconduct, and learn ways to create safer spaces in churches and congregations. Importantly, this education has extended beyond the clergy and is being expected and increasingly required for all who desire to teach or serve on a committee or minister in any way within a congregation. This is making a difference! It is changing culture and at the very least, raising awareness.

Maybe the church has actually been leading the way with an insistence that hiding abuse and misconduct and bad behavior will no longer be tolerated. Maybe we are simply in a time when people who once remained silent and suffered alone are finding that they can speak their truth and others will speak and stand with them. It is not by accident that the powerful respond by denial and then attacking their accusers, for that is a tactic of power and privilege that has worked maybe forever. There are growing signals that it may finally be stopped.

But it is not only abuse and predatory behavior; it is also a cultural and societal issue that says, “boys will be boys,” where poor behavior is not only accepted but is thought to be humorous. This may be exemplified perhaps by the photo of a grinning Al Franken as he gropes a sleeping Leeann Tweeden while on a USO tour in 2006.

I remember at a clergy conference, witnessing an elderly minister laughingly patting a young clergywoman on her backside. I noticed that evening that he did this more than once, although never to a male clergy. I doubt if he even thought anything at all about it. As a white male growing up in the previous century we simply had a pass on something like that.

Are we in a time when society will put the brakes on abusive behavior by those who have more power? I can’t answer that; but I know that I have been changing, becoming more aware of boundaries and their importance, more aware of the power that I have by nature of my position. Those of us who minister during times of transition are in a unique position to help a congregation reflect on their strengths and joys; and also to observe and question patterns of behavior.

What do you think? What are some of the ways that you have helped a congregation to become a healthier church and community? Have you observed patterns of behavior by leadership that speak of power rather than respect?

Preparing for and Recovering from Un-natural Disasters

November 7, 2017 no comments in Reflection Connection by acmead

Preparing for and Recovering from Un-Natural Disasters
by The Rev. Martin Homan 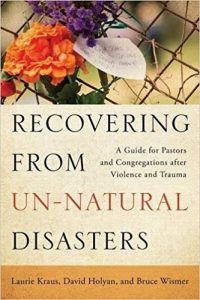 With the unnatural disasters occurring in New York City and now in a church in Texas do we as pastors and churches need to prepare for such occurrences even at our own doors? Westminster John Knox Press recently published RECOVERING FROM UN-NATURAL DISASTERS: A Guide for Pastors and Congregations after Violence and Trauma. The authors are Laurie Kraus, David Holyan and Bruce Wismer. Whatever we use in our church bodies what can we do to assist our faith communities with such disasters?

The Kindle version is FREE. To download and read: www.amazon.com/recovering

Our grandson is five. He is beginning to want to help, with things like baking pumpkin muffins, which I think he experienced in kindergarten over Halloween. Anyway, he came into the kitchen and saw all the ingredients being assembled on the counter. “Can I help?” he asked.

Have you ever seen a five year old help with baking? We brought a stool out of the pantry and positioned him in front of the counter and the mixing bowls. He helped level the flour in the measuring cup (at least much of it). Dipped the measuring spoon into baking soda, only spilling some of it on the counter, deposited the rest into the mixture. Then came the eggs! He took one and tapped it down on the counter, perhaps just a little too hard, and with guidance, deposited most of it into the separate bowl, using his finger to move the remaining egg white from the shell to the bowl. He helped measure the oil and stir it into the eggs, buttermilk and pumpkin mixture.

What a mess! And later, after they came out of the oven, what wonderful, tasty pumpkin muffins!

As we ate the still warm, just out of the oven muffins, I reflected on, what else, interim ministry! We had fun! We made a mess! And the muffins were delicious! And best of all, a five year old is learning to measure and sift and combine ingredients to make a finished product. He is learning to follow instructions and to persevere when it seems the egg shell hit the counter too hard. And he is learning that his efforts can produce something good. And if you get some eggshell in the bowl – you can get it out!

Our congregations are often unfamiliar with the joy of discovery that is a part of every transition. Often they begin by wanting the process to be finished and get on with their ministry.

It would have been much easier to simply have our grandson watch as we made muffins. It is perhaps easier to glide into a congregation as it begins a time of transition and take over the helm providing pastoral care, preparing liturgy, overseeing anything and everything. It is both harder and messier (not on the level of a five year old learning to measure and mix ingredients) as even adults learning new skills involve an expected level of error and miscalculation.

I wonder how many of us who do intentional interim ministry enter a new congregation with an invitation to ask questions, explore possibilities and try new things. It is, after all, the possibility of needing a new wineskin along with the wine!

What are some of the things that you have tried? What are your experiences that have been messy but have produced something special?

Don’t Just Talk About Mission-Act With Passion! By Susan Beaumont

May 2, 2017 no comments in Reflection Connection by admin

Don’t Just Talk About Mission-Act With Passion!
By Susan Beaumount

Congregations waste precious time forming mission statements that fail to inspire action. Writing a mission statement produces clarity, but rarely generates energy. It’s time to move beyond mission and start focusing on the passion that compels us to make a specific difference.

We often think of an individual as having a vocation and an organization as having a mission. Religious organizations have both a mission and a vocational calling. They are related to one another but they are not the same thing. A mission explains, but a vocation inspires.

Susan Beaumont was one of the 2017 Annual Conference Keynote speaker.

All Saints – By Rev. Alan Mead

November 1, 2016 no comments in Reflection Connection by acmead

For Christians today is All Saints’ Day. It is a day that we pause to remember and give thanks for those who are no longer here. Of course we remember those who have had strong faith and who have accomplished remarkable achievements; but increasingly I find myself remembering those who have touched my life in small as well as large ways, those who’s smile and touch and gentle voice are present still in memory; those who, although no longer here, continue to encourage and form me. As I look out toward the horizon the sea glistens in the morning sun and, with varying hue, stretches to the boundary of my vision and beyond.