Step Two – Fundamentals of Transitional Ministry: The Work of the Congregation (FTMC)

FTMC offers participants the opportunity to build on their own experience as they develop expertise in the specialized ministry of the Transitional Pastor.

Phase 1. FTMC is designed to provide information and experiences that will be helpful to persons who plan to function in a congregational leadership role especially during a time of clerical transition. Understanding that each congregation is unique and that polity, location, and dynamics of the congregation must be taken into account in every situation, IMN does not prescribe a specific plan for interim work. An essential principle of the IMN is that there is not a clearly defined path that prepares a congregation for its new future. Accordingly IMN training offers a wide variety of tools for this work. The on-site workshop experience prepares participants to make choices about when, where and how to use these tools. FTMC is based upon adult learning principles. Participants will be provided with readings in advance of their attendance at the program. They are expected to attend and actively participate in all workshop sessions. In addition there will be short “homework” reading assignments each evening. The IMN faculty is thoroughly trained and experienced practitioner of Intentional Interim Ministry. 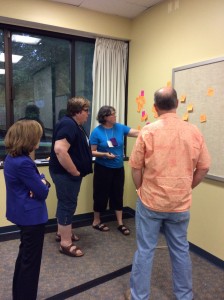 Phase 2. Fieldwork gives participants opportunity to use the skills and principles acquired in FTML and FTMC in their own ministry settings. Fieldwork is a distance learning process which uses both email and conference calls. A member of the IMN faculty leads the groups composed of from four to six people through a clearly defined process of project development and reflection.

Click here for an introduction and F & Q on Fieldwork.

The cost of the workshop is the Tuition

The 2021 tuition (Manual/Workbook/handouts and Fieldwork for each event is $1390.00, Current IMN Members will receive a $200.00 discount (use customer code IMN during check out) .

All classes will begin and end in Eastern each day

Pegi Ridout, Over the past two decades, Pegi has been an Intentional Interim Minister in seven congregations and at a retreat centre. She is a member of the IMN Faculty and an occasional consultant with Credence & Co.

In 40+ years of ordained ministry, she has served a variety of rural, urban and suburban churches, in Southwestern and Niagara regions of Ontario, Canada.

Rev. Chris Hart is a Poet, Storyteller,  Process Theologian, Professional Transition Specialist, Revitalization Pastor, Paper Mache Artist and a Fusion of Science and Faith. He is an avid live streamer, and is authoring his own social media empire. He is committed to helping the church of today emerge into the twenty second century. He is dedicated to quality intentional Interim Ministry.  Chris uses an empowering and adaptive leadership style to help communities of faith to grow, and change. He is passionate about worship that is fresh, creative, engaging, and participatory.

Pastor Chris serves on the Committee on Standing for the Northeast Association of Southern New England Conference of the United Church of Christ and on the education team of the Interim Ministry Network which is rewriting the training curriculum for Transitional Ministry. Additionally he is a member of the Clergy Development Ministry Council for the Southern New England Conference and the Disaster Resource & Response Team.

Pastor Chris has lived in Southern California, Washington State, Saint Louis, Pennsylvania, and currently resides in Massachusetts.  His degrees focus on Sign Language Interpreting, Drug and Alcohol Counseling and Developmental Psychology. He earned his Master of Divinity from Eden Theological Seminary in 2008 and became a Transition Specialist in 2013.

Rev. Helen Prior is an Ordained Interim Minister in the United Church of Canada. She has served four pastoral charges as a settled minister and completed six intentional interim ministries in Saskatchewan, and southern Ontario. She has served as faculty since for the Interim Ministry Network since 2015. Helen has a reputation for using her pastoral skills and sense of humour to invite congregations into dialogue, and helping polarized groups come closer together. Among the six interim ministries Helen helped one church find an appropriate neighbouring church to amalgamate with. In another instance the congregation had been in conflict for over 20 years, so she co-ordinated conversations for discernment which led to successful disbanding and closure. At present Helen is serving a church newly amalgamated from three founding congregations. When away from work Helen enjoys travel, good music being walked by her pups, and spending time with friends and family.

The Rev. Samuel Scott Colley-Toothaker, is an Episcopal Priest who currently serves in the Diocese of Oklahoma, where he is priest in charge at The Episcopal Church of St. John, in Tulsa. Prior to his current position, he served in the Diocese of Western New York, the Diocese of Chicago, the Diocese of Southern Virginia and his home Diocese of Maine. Since returning to full time ministry in 2000, Sam’s work in the Church has focused on transition and conflict resolution and mediation in troubled parishes, as well as a consultant at the judicatory level. In 2012 he joined the Interim Ministry Network (IMN) and shifted his focus to “Intentional Transition Ministry” recognizing that an “ounce of prevention is worth a pound of cure.” Sam is an apprentice member of the IMN faculty and is current chair of the National Board of Directors for Interim Ministries in the Episcopal Church.

A former member of the Oblates of Mary Immaculate (OMI), a Roman Catholic missionary order, Sam has a broad business background with experience as an investment banker and a corporate consultant. Sam is noted as a retreat leader for clergy and lay people. He has served on numerous boards and foundations. He holds a Master of Theology from St. John’s in Boston, a Master of Divinity from Episcopal Divinity School in Cambridge, Massachusetts, and has an extensive background in clinical psychology with a concentration in family systems and corporate psychology.

Due to the COVID 19 uncertainties many venues have decided to not open until the first quarter of 2021. IMN has decided for the safety of our faculty and participants to reschedule in-person classes starting in the spring of 2021.

The Good news is that training will continue through virtual learning. Participants will receive the same training as in-person, just in a new way. IMN is ready to assist in the best possible way so participants are ready to guide their congregations through these uncertain times.

Thank you for your continuing support.

The cost of the workshop is the Tuition + Room/Meals.

The 2020 tuition (Manual/Workbook/handouts and  Fieldwork for each event is $1390.00, Current IMN Members will receive a $200.00 discount (use customer code IMN during check out) . Contact the IMN office for room and board information. Housing cost is priced for 4 nights stay. Some sites have 5th night stay options. The commuter cost is priced for 5 days. All event classes begin at 8:45 am with registration/check in and concludes at 12:00 pm on the last day.

Attendees must have successfully completed the Fundamentals of Transitional Ministry: The Work of the Leader course within the previous year. The academic portion of the work is scheduled for five full days, generally Monday through Friday. Due to the amount of content presented evening sessions may be necessary.

The final requirement for completion of the intentional interim training is the successful execution of a fieldwork project. Students who have completed the FTML and FTMC courses are divided into teams of six with a faculty coordinator.Over the course of about six months, each student proposes a demonstration project on an interim subject. He or she is guided through the conception, research, execution and publication of a project that illustrates an ability to apply the theoretical knowledge gained in the other two courses.The course is taught by e-mail and monthly teleconferences between the participants.